Wine 101: the Gavi wine from Piedmont

Talk about Piedmont and its the red wines like Barolo, Barbaresco and others made from Dolcetta and Barbera which easily comes to mind. These red wines are easily accessible in Singapore and were wines which I could lay my hands on for some time. Among the Piedmont whites the first one I had the opportunity to taste was the sparkling white, Moscat d' Asti. (Quite a few consumers will attest to the popularity of 'Villa M' over here in the local market).

However the dry whites are another matter. Its only these last 4 years that I get to see more gavi and arneis wines (albeit still from a handful of producers). One reason for this positive change can be the fact that there is an increase in the number of wine importers and wine retail outlets bringing wines from non-traditional sources. Certainly good news for consumers here, I must say.

Wine-bits: Called a 'Gavi' wine it is named after a town of the same name 'Gavi', It is made exclusively using the Cortese grape varietal. This wine is produced in the Piedmont region in an area which extends from the village of Novi Ligure to the lower hills of the Ligurian Apennines, and produced in the villages of Gavi, Bosio, Novi Ligure, Francavilla Bisio, Pasturana, Parodi Ligure, Capriata d'Orba, Carrosio, San Cristoforo, Tassarlo and Serraville Scrivia. However wines labelled 'Gavi di Gavi' are produced exclusively in the village of Gavi (within the province of Alessandria). 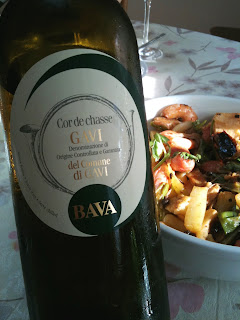 The 2008 Bava Gavi di Gavi Cor de Chasse, DOCG. I was able to purchase a couple of bottles from Crystal Wines recently. Its not of a wine style which requires deep thoughts over its nature. Instead, one should just drink and enjoy this one. Its light, subtle, easy to approach and almost neutral. It showed straw-yellow colour with subtle flavours of citrus and grapefruit, revealed a light body made crisp with acidity and showed good balance. The finish hints at lime rind notes. Its a subtle wine which works great as an aperitif, and also as an accompaniment to food with low to moderate flavour intensity.

I tried this wine with salad, sashimi, sandwiches, aglio olio pasta and even fried oyster omelette dish from the neighbourhood hawker centre and it paired well. Brought a bottle to Sin Hoi Sai eating house at Tiong Bahru to go along with some seafood dishes there and it did not disappoint me either. It also makes for a decent drink during hot afternoons (you can easily do half a bottle on your own without feeling overwhelmed).

Next time you swing by a wine retail outlet, be adventurous and check if it retails a Gavi wine. Italy certainly has more than pinot grigio to offer in term of its whites.
Posted by morgun pathi at 12:23 AM