Wines from an unexpected origin, India.  You don’t as yet see many of these in Singapore's wineshops. The last time I tasted some wines from India was during the Hong Kong Wine Exhibition two years ago.

A good friend of mine Aaron recently spent a short stint in Mumbai  and brought back two wines produced by a new winery called the Good Earth Winery. Owned by Girish Mhatre, this winery is a new addition to the wineries in Nashik, in the state of Maharashtra (India).

Founded a few years ago, 2008 is its first vintage. It does not as yet have a ‘physical presence’ (like owning its own vineyard or having its own production facility). Instead it purchases good quality grapes from farmers in Nashik (a place known for its cool micro-climate and well drained soil) and uses existing facility of another winery there to produce its wines and bottle them.

Aaron brought back the 2008 Aarohi and the 2008 Brio for us to taste and discover how these varietals show themselves in a relatively new wine region they ain’t famously known for. 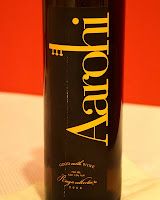 2008 Good Earth Winery Aarohi, sauvignon blanc.
Made in stainless steel containers, it shows light straw yellow colour, with strong aromas of herbs and grass. It reveals a light to medium body, medium acidity, flavours of grass, herbs and guava on the palate, and possesses a short finish.

(A wine-bit: Sauvignon blanc is one of the varietals which is at ease in expressing itself differently depending on the soil composition of the region in which it is grown and the wine making style adopted. If you get the opportunity, do try sauvignon blancs from different regions like Marlborough, Adelaide Hills, Pouilly Fume and California to appreciate the different nose and palate profiles this varietal is capable of). 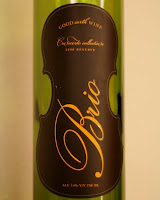 2008 Good Earth Winery Brio , reserve shiraz
Purple red in colour, the first nose hits you with strong aromas of a spice box with an assortment of spices, which is then later followed by black pepper and black fruit notes. Medium bodied, the flavours also follow through with pepper and ripe black fruit notes. The mid-palate and finish reveals notes of coffee and cassis. The wine has been aged a year in new oak barrels. This red needs to breathe a little in a decanter to come together and show itself.

It would be too early to say if the character profile of these wines are similar to wines produced by other producers in this region. That would require further tasting of wines from Nashik in the near future.

The current wine industry in India using international varietals such as cabernet sauvignon, shiraz, sauvignon blanc and chenin blanc is a very young one. Though at present a handful of wineries are making their presence felt in the US and European markets, the rest need time to grow. One good thing these wineries have in their favour is a growing local market (centred at the moment within cities like Mumbai, Delhi, Bangalore and Goa) which possesses the means and interest to consume wine.
Posted by morgun pathi at 11:21 PM