When at Singapore Wine Fiesta 2012


This weekend I went along with a few friends and visited the Singapore Wine Fiesta 2012 held at Customs House. Slated as the largest wine event for the general public in Singapore, it certainly pulled in a good crowd. 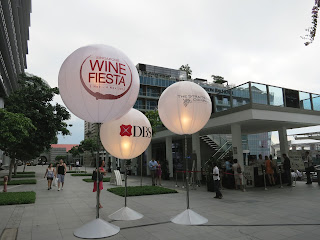 The tasting guide highlighted ‘65 cabins’ (wineries), each offering their liquid wares for tasting and sales. I took the opportunity to take pictures of this event. The pictures include participating winemakers, winery owners, wines and folks in general enjoying their weekend at this tasting. You can have a look at the pictures via this link; Singapore Wine Fiesta 2012 photo album.

Suffice to say, this event had the strong support and eager participation of a good number of wine enthusiasts. The first 3 hours of each day provided some quiet moments to talk to winemakers and winery reps. But by the later part of each day's tasting, the place was challengingly packed. If the aim of the organizer is to introduce wines in their portfolio to wine consumers in Singapore, then that goal would have been satisfactorily met with the number of people who attended this event. 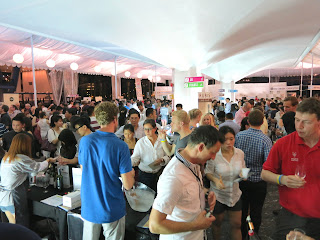 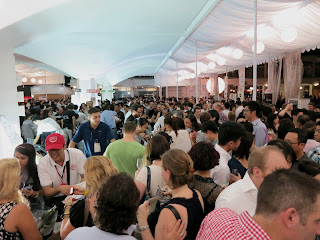 The visitors by and large seem to loosely fall within three categories in their pursuit for wine over this weekend.

The brand seekers. Three oft mentioned wine brands during this event were Yarra Yering (Yarra Valley, Australia), Leeuwin Estate (Margaret River, Australia) and Mischief and Mayhem (Burgundy). I met wine folks who during conversation mentioned that their friends have advised them to look for these labels and to try wines from these wineries without fail. These wineries, having over the years built a degree of recognition for quality in the minds of consumers, tend to find ready enthusiasts keen to taste their wines.

Another popular table was Cabin 46 where the Hungarian Tokaj-Disznoko 2009 Late Harvest Furmint and 2002 Aszu 5 Puttonyos Tokaji were served. This table was so popular that the sweet wines ran out in a few hours leaving a fair bit of disappointed consumers who came for the event later in the evening.

Max Ferdinand Richter (cabin 44) and Schloss Schonborn (cabin 45) showcased rieslings among which the Kabinetts and Spatlese ones offered sweet respite. Delas wines (cabin 24) had a 2009 Muscat de Beaumes De Venise which had enthusiasts bringing their friends to the table to try. Two unique sweet portions came in the form of Rubis (cabin 48) which offered a ‘chocolate wine’ and Bibich winery’s (cabin 47) Ambra Prosek NV, a dessert wine made from white varietals known as Debit and Marastina.

The explorers. A small group of wine folks were eager to sip wines from less known wine regions (at least less known in the local market that is). Towards this end they made their way to Japan’s Grace Wines (cabin 22). These wines made with Koshu grapes attracted quite a bit of interest. Lebanon’s Chateau Kefraya wines (from Bekaa valley) and Croatian wines from Bibich (North Dalmatia), Boskinac (Pag island), Coronica (Istria), Korta Katarina (Orebic) and Meneghetti (Stanija) were the other labels sought by folks who wanted to taste wines made from not-so-known varietals and regions.

The atmosphere was certainly different from the sombre, seated wine tastings conducted in hotels or when one is at trade wine fairs :p And I think its alright to have these occasional big wine fairs where exuberant folks explore wine in an informal setting in the company of friends. Who says wine must be a straight-laced, serious affair? :p The price for the event, being reasonable for the number of wines offered for tasting, may be one reason for the strong turnout.

The current choice of location for the event has positive points like being centrally located and with easy transport links. The one consideration for future events though may be if this place can comfortably accommodate a turnout bigger than the one witnessed this weekend ... but the event organizer has a whole year to ponder over such an issue :)