Peter Femfert was in Singapore early this month to introduce his wines to a small group of wine enthusiasts. We had the opportunity to get an introduction to his wines, understand the reason behind the beautiful wine labels & wrappers and obtain some information on his vineyards.

A little history. It’s a ‘farmhouse’, a wine estate in Tuscany located between Florence and Siena. A brochure highlighting the history of this estate states: “Nittardi used to be a ‘stronghold tower’ referred to as “Nectar Dei” as far back as 1182”. Why a stronghold tower? Things weren’t all that friendly between Florence and Siena back then. Castles found today north of Siena bear witness to the power play between these 2 cities. (I find Hugh Johnson’s book ‘Tuscany and Its Wines’ a pleasant read with regards to Tuscany’s wine making history.)

Michelangelo Buonarroti, owner of this estate in the 16th century, not only produced wines but also sent Nittardi wines to the Pope in Rome then as ‘genuine gifts’.  This estate has been a stronghold tower, a farmhouse and a vineyard offering grapes for wine production for a good period of Tuscan history.

﻿
Present owner. Since acquiring this estate, Peter Femfert has replanted vines, improved the vineyard and in 1999 built a new cellar. I emailed Leon Femfert (his son) on the viticultural practice and his reply was: ”Yes all our vineyards in Chianti Classico and Maremma are organic. It is more healthy for everybody who works in the vineyards, an aspect that is most important for us. Also it helps to preserve the soil and the biodiversity of vineyards and the surroundings better and finally it helps to express the terroir of our wines more clearly.”

The second vineyard is located in the Tuscan coastal region of southern Maremma. Located 18km from the sea and 240m above sea level, this land is locally known as ‘Mongibello delle Mandorlaie’. It was acquired in 1999 and planting of vines started soon after. Presently there’s 26 hectares of land under vine (20 hectares of own land and 6 hectares on rented land). Grape varietals grown here are: Sangiovese, Cabernet Sauvignon, Cabernet Franc, Syrah, Petit Verdot, Alicante, Merlot, Vermentino, Roussanne and a few other varietals on an experimental basis.

Since early 2000, two supertuscan reds come from this vineyard; the “Ad Astra” and the “Nectar Dei”. In 2013 a white wine was introduced as well; the “Ben” made from Vermentino. Peter Femfert clarified that 'Ben' stands for ‘Beniamino’, meaning “the youngest and most beloved child” in Italy.

A participant queried about the intended style of Nittardi wines. Peter Femfert mentioned that he strives to produce wines which display "roundness, softness and fruits in the palate”. “Flavours may change year to year based on weather conditions and other unforeseen elements, but these 3 characters are what I like our wines to show”, he explains. 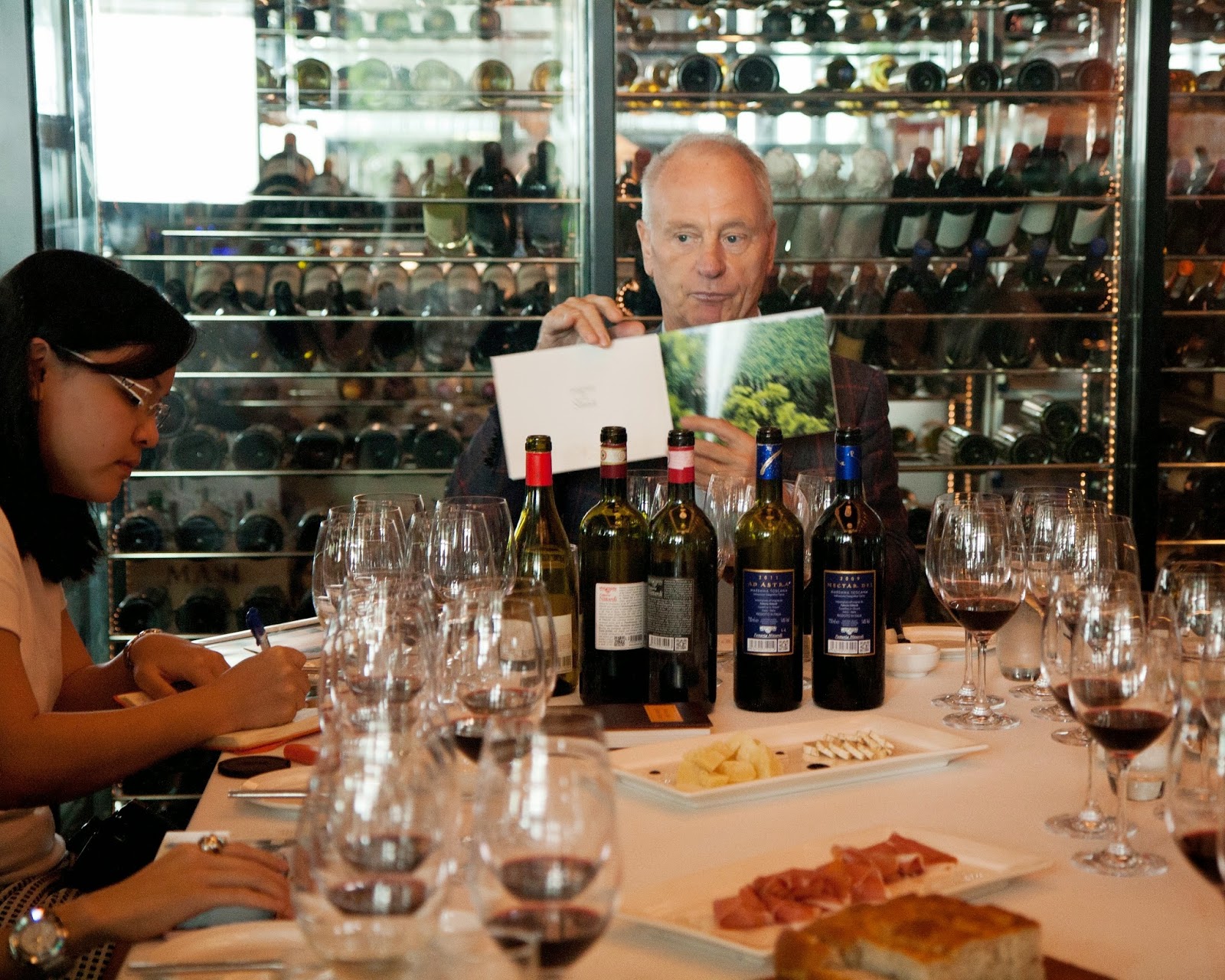 2013 Nittardi Ben Vermentino IGT, Tuscany
First released in 2013, it’s a single varietal wine made from Vermentino. Fermentation and 6 months of aging in stainless steel tanks help the wine retain freshness. Nose shows citrus and mineral notes. A medium bodied wine, it reflects similar characters in palate as well. Refreshing acidity keeps the body alife in palate and helps to one to experience a ‘long finish’. I must say that the good body weight displayed in the palate makes this wine even appropriate for main dishes with a medium body weight as well. Buy to drink (there’s no need to age this wine).

2009 Nittardi Riserva, Chianti Classico DOCG
(Sangiovese 95%; Merlot 5%). Grapes for this wine come from Vigna Alta, a south facing plot located 500m above sea level. The wine is only produced in exceptional years. Fermentation takes place in stainless steel tanks. Aging takes place for 24 months in French oak barrels; followed by another 6 months in bottle. Ripe dark berries and spice notes show on the nose; palate reveals a full bodied wine with dark fruit (black currant) flavours. Palate reveals a smooth texture; tannin and acidity show themselves offering structure. There’s a degree of austereness showing in the palate as well. A wine with depth and complexity, it shows the potential to develop further with age.

2011 Fattoria Nittardi Ad Astra IGT, Maremma, Tuscany
(Sangiovese 40%, Cabernet Sauvignon 25%, Merlot 15%, Syrah 15%, other varietal 5%). According to Peter Femfert, this is his best selling wine at the moment. The grapes for this wine come from the Mongibello delle Mandorlaie estate in Southern Maremma. Fermentation takes place in stainless steel tanks; aging for 9 months in French oak barriques followed by a period of bottle aging before release. This wine holds a deep red core with purple hints in the rim. Aromas display intense berry fruit and plum notes. The palate shows roundness and a generous ‘mouthfeel’ of fruit flavours. Soft tannins and acid support the fruit flavours rather than overwhelm it. A wine made to be enjoyed in its youth; but can be kept for mid-term aging as well if one is so inclined.

2009 Fattoria Nittardi Nectar Dei IGT, Maremma, Tuscany
(Cabernet Sauvignon 40%, Merlot 20%, Syrah 20%, Petit Verdot 15%, other varietal 5%). Fermentation takes place in stainless steel tanks. Wine undergoes aging for 22 months in French barriques and another 6 months of aging in bottle. Wine showing a red-black core in the glass. Red & black berry fruits and spice notes greet the nose. A similar profile of berries, spice and hints of vanilla show in the palate. A full bodied wine with a smooth and supple body. Good depth and complexity; an elegant wine (reveals fruits without being too upfront or showy). A wine with a potential to develop if aged further.

Peter Femfert explained that in keeping with Michelangelo Buonarroti’s tradition of sending wines to the Pope (as was practiced back then in the 16th century), he makes it a point to send a case of Nectar Dei wines to the current Pope each year.

In Asia, the 3 biggest importers of Nittardi wines are China, Korea and Japan; and these wines can also be found in Korea, Hong Kong, Thailand, Taiwan and Singapore as well.

If you like to see more photos from this master class, you can visit the link below:
Fattoria Nittardi Masterclass Photo Album