First time tasting the 2006 Soldera, Case Basse,  Brunello di Montalcino; in fact, it’s the first time I am tasting a Soldera wine. Ruby red greets the eye with a degree of liveliness. Aroma was closed initially but soon opened up with a little aeration in the glass to reveal youthful red fruits (cherry) and floral aromas. Palate reveals a light (plus) body with cherry flavours and hints of spice. Silky tannins support the fruit element rather than overwhelm it; and a good amount of acidity keeps the body vibrant and contributes to a lingering finish. 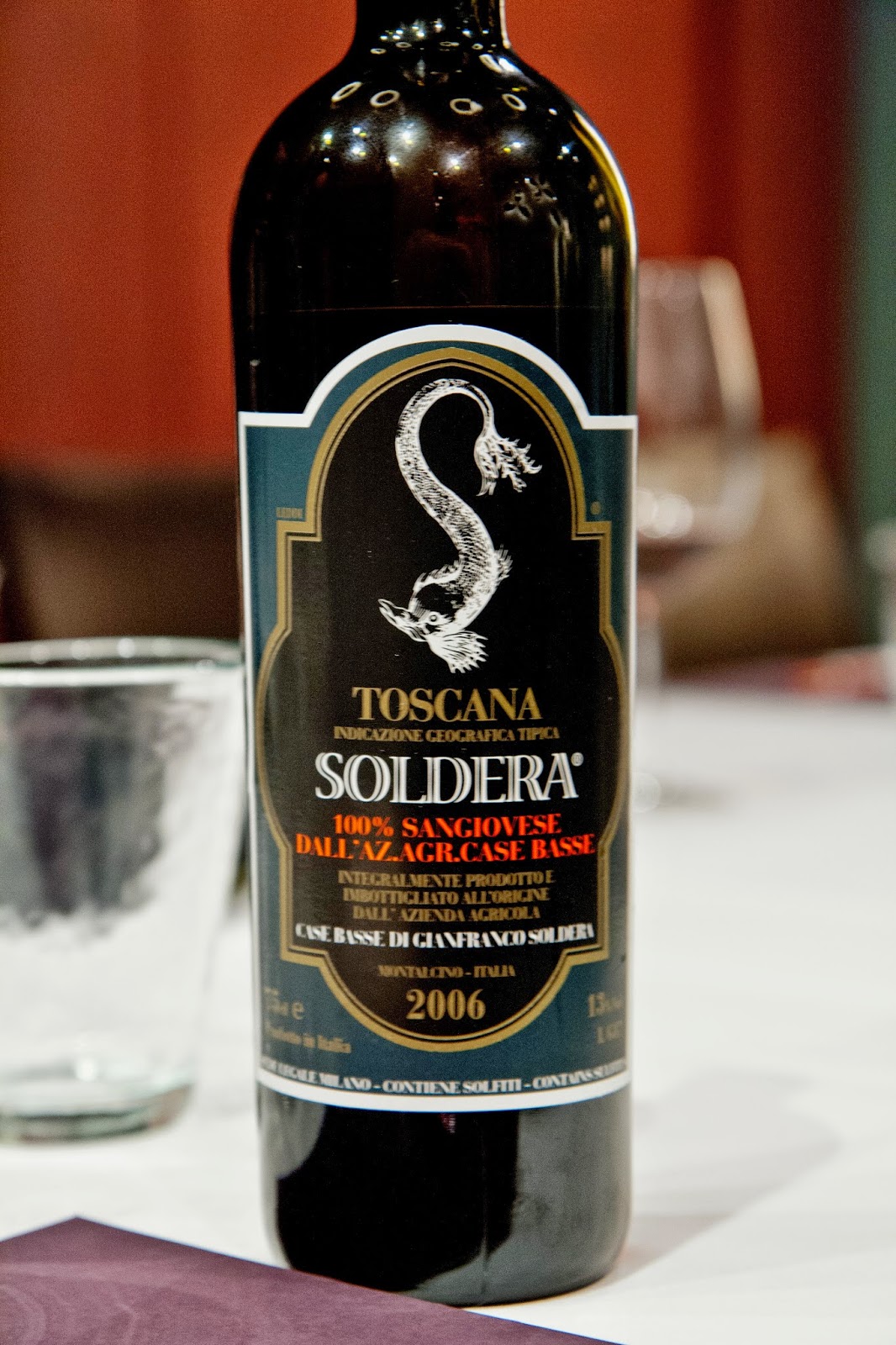 But descriptions about aromas on the nose and flavours on the palate just hint at a two dimensional perspective of what this wine possesses rather than inform on its essence. What struck me as the wine evolved in the glass was the play between the ‘delicate body’ and the flavour intensity which pushes to reveal itself via this light bodied wine. Big in flavour intensity, without being big in body. It’s about flavour intensity clothed in light-weight elegance and refinement as opposed to opulence or screaming robustness. It’s an awareness best to be realized while the wine reveals itself sip upon sip on the palate; my description of this experience in words is a weak attempt, I must confess.

I got the opportunity to taste the 2006 Soldera during an ‘Event Launch’ recently organized by Corney & Barrow in Singapore. Ms Monica Soldera of Az. Agr. Case Basse di Gianfranco Soldera was present to provide information on the winery; as well as Mr Adam Brett-Smith (of Corney & Barrow).

Ms Monica explained that in early 1970s, her father Gianfranco Soldera decided on making wine and searched for an ideal location. In 1972, he finally settled for a disused farmhouse which was located on the southern side of Montalcino, facing southwest and 320m above sea level. Well intended advise of the time informed him that the land was not suitable for viticulture. He on the other hand saw the soil and location as most suitable for making good quality wine and purchased it. History, passion and hard work proved him right. There were no vines on the land then, no ‘vineyard’ there. He planted Sangiovese Grosso vines in 2 plots of land. The Case Basse plot (2 hectares) was planted in 1972 and the Vigna Intistieti plot (4.5 hectares) in 1973; around 7,000 vines per hectare. Her father began producing Brunello wines when there weren't many producers around. Back then, there were less than 20 producers, now there are more than 200 she highlights.

Vineyard management meant first taking care of the environment in which the vineyards are located. Towards this end, her father encouraged the “growth of flora and fauna, and a bird and insect-rich environment” within which to sustain the vineyards. “Everything is done by hand”, she mentions as a matter of fact; referring to pruning in winter and green pruning during the growing season (to keep the yield low and to ensure proper ripening of remaining grapes). The soil is revitalized with scattered oat straw and cow dung; organic farming, a favoured approach.

Strict berry selection is ensured so that only quality grapes are used for winemaking. Traditional winemaking practices are preferred: minimal intervention, fermenting without temperature control, the use of only natural yeast (no cultured yeast or enzymes), no fining or filtration and long aging in large Slavonian botti (well beyond the Consorzio’s Brunello di Montalcino DOCG rules). Gianfranco prefers the use of large Slavonian botti for aging which he believes will reveal a truer expression of terroir within the wine rather than the use of smaller French barriques (which imparts vanilla and chocolate flavours to the wine). Wines are only released when Gianfranco deems them ‘to be ready’.

Mr Adam Brett-Smith explains that Gianfranco respects old practices which he believes have evolved for a reason over “time and experience”. But he also advocates the use of modern techniques and research to “challenge the validity of accepted norms, if only to gain greater understanding of what works and why – and then to improve of that.” He has tie-ups with various universities to study the effects of climate change in his vineyards and monitor the winemaking process within the winey with a view to tweak changes as necessary.

Limited supply of next few vintages

A tragedy befell the winery in Dec 2012. An act of vandalism in the cellar at Case Basse destroyed most of its Brunello wine over 6 vintages (2007 to 2012) leaving only about 22,000 litres of wine. If the 'unaffected 2006 vintage' itself is in limited supply, the ‘affected vintages’ will certainly be a hard and rare find (if at all) in the future indeed.

In Singapore, you can contact Ms Kate Tan (of Corney & Barrow) for more information. Tel: +65 68093900; singapore@corneyandbarrow.com