It was a call to explore food and wine after a few days of quiet respite. I received an invite to attend a food and wine pairing workshop conducted by Hilton’s sommelier, Ms Stephanie Rigourd. 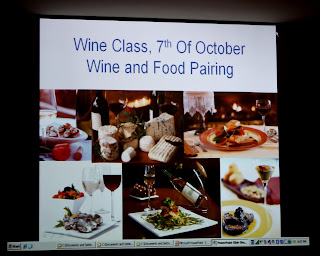 Ms Stephanie has quite an affiliation with things wine. She has studied at the reputed Tain L' Hermitage wine school under Maitre Sommelier Pascal Bouchet. She holds 2 diplomas related to wine, has worked in Chateau Smith Haut Laffite's hospitality complex in Bordeaux for a year and also as Chef Sommelier for Chef Laurent Peugeot in Burgundy for 18 months. She has visited over a 100 domaines in the pursuit of wine knowledge and even made her own wine, 'Bourgogne Rully, Cuvee de la petite sommeliere' (partnering wine maker Ludovic Belin in 2008). All these achievements at a young age, I must add! 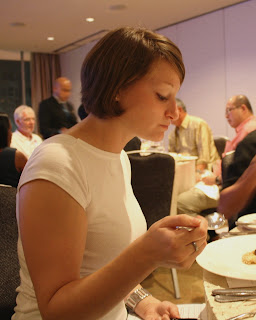 Stephanie started the workshop by sharing a key piece of advice with the 16 participants for the evening: “Pairing is the exercise of bringing food and wine together in such a way which makes people happy”. I think that about sums up the quest in any food and wine pairing pursuit.

Striped off any deemed rules, guidelines and jargons, the practice of pairing is simply an act to enjoy food and wine together. It's not necessarily about getting the pairing ‘technically correct’; but more about you the diner being personally ‘happy’ having a particular dish with a particular wine. 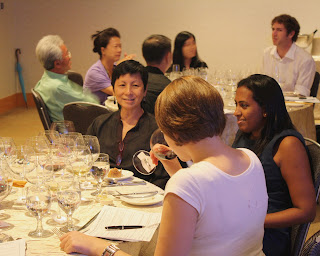 Our palates differ. Whether we like or dislike a particular dish or specific wine is a matter for personal preference. Even the ‘reasons’ for liking a dish or a wine differs between 2 individuals. It’s only fair then to expect each diner to have his or her personal preference (which makes them ‘happy’) during pairing exercises.

Gladly, this diversity in individual preference was adequately witnessed when the 3 tables of wine enthusiasts were served with 6 courses (each course coming with at least 2 wines to be paired with) for the evening. Diners voiced differing preferences and different reasons for a particular preference as well.

Some made their choices by taking note of how a wine affects a particular food and opted for a wine which 'showed the food best'. They preferred a wine which did not subdue or negatively affect the flavours in a dish. Other participants on the other hand, looked at how the food affects the nature of a wine and opted for the wine which holds and shows itself better when paired with a dish.

For example, take the response from fellow diners when served with the first course.

At my table, for the raw oyster served cold, most preferred Jaboulet’s crisp, lean white as it allowed them to enjoy the freshness and subtle flavours of the oysters. They found Neudorf’s chardonnay great on its own (with strong flavours, and a bigger, rounder body); but when paired with oysters, they felt that this wine overwhelmed the lighter flavours and freshness of the oyster.

But 2 diners at my table however preferred the Neudorf’s white over Jaboulet’s. They felt that the oysters tend to subdue the flavours and mid-body depth of the Jaboulet and make the wine show itself weak on the palate. The Neudorf white however showed depth of body, appealing flavours and a pleasant finish despite being tampered by the oysters.

Likewise when these 2 wines were paired with the hot clams; most preferred Neudorf’s chardonnay this time round, yet one went with Jaboulet’s white.

The risotto showed strong aromas but its body however revealed a low intensity of flavours. Most diners preferred the risotto with the traminer and sauvignon blanc blend as the wine pleasantly held itself against the risotto. Quite a few diners did not prefer the interaction between the firm tannins of the young Bordeaux red and the flavours of the risotto.

However I must say that the risotto helps to soften and ‘open up’ the body of the red. After sampling the risotto if one goes back to the young red, this wine now displays a smoother, rounder more approachable body. This is one pairing where the food helps to make the wine ‘taste better’ than when having the wine on its own.

A quick and brief snapshot of diners' preferences for the rest of the evening’s courses:

For the seabass, the majority of the diners voiced a preference for the 2007 white burgundy. The salmon received a mixed response; most going for the white wine while a few preferred the 2008 bordeaux red with the chunky meaty salmon.

Most diners swayed towards the 2007 Rhone red for the lamb, beef and duck servings. Without going into too much detail, one can say that this Rhone offered a pleasant compliment to the 3 types of meat on the plate. A few though voiced support for the 2006 bordeaux red and the beef pairing.

This course got a mixed response from the diners. The 2008 white was preferred by quite a few diners for the creamy soft cheese and the goat cheese. The blue cheese offered a challenge though for the 3 wines.

This course brought out some clear preferences. Most diners favoured pairing the 2006 Domaine de La Place with the raspberry chocolate cake and the 2007 Muscat de Beaumes from Jaboulet was favoured for the lemon meringue pie.

All in all it was an interesting exercise which pleased the mind, delighted the heart and thrilled one's taste buds :)

Any good book on wine will clearly state that the only rule in food and wine pairing is to go by your personal preference, that which makes the diner 'happy'. Pairing 'guidelines' are out there, but these are merely to assist you in avoiding food and wine 'clashes' rather than restrict your choices :)

So go forth, explore and discover that which pleases you!